Hi, Welcome to interests, here we have movies, songs, news and many other things
So join right in, it wont take long, and you can be a part of our community.

Get in, we have got songs, movies, games, articles and many other things, all for free...

You are not connected. Please login or register

Samsung is ordered to pay 1 billion dollars in damages for infringing intellectual property.

As a US court had decided to award apple $1bn from samsung for the damages.
"It will lead to fewer choices, less innovation, and potentially higher prices," the South Korean firm said.
Apple, however, said it applauded the court "for finding Samsung's behaviour wilful and for sending a loud and clear message that stealing isn't right".

We all know that there is a problem between the two companies, so now apple have got the chance to import bans on several of its rival's products. Samsung has said it will appeal. and ever apple wanted $2.5bn, Samsung had sought $510m.
FnR 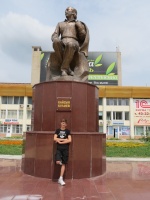 i heard it was $1.2bn
and thanks for the good news my friend

I personally think this is gay
FnR

what is gay?
Ozzy

This thing that happened between apple and Samsung apple has been stealing ideas since long time now they`r suddenly suing people for stolen ideas ???

Well you are defiantly right, i mean windows was the first one creating the "electronic tablets" and they never sued anyone for ideas.

but i have to admit, samsung did own apple by paying them coins. That was some smart shit.
It~Matters!

idk i heard that apple lost the court or something is that right?
FnR

yea i heard such a thing, but i saw pics of samsungs coins received by apple
Sponsored content